How To Make A Wireless Lav Microphone For Under $20 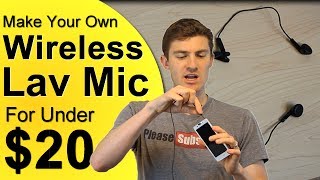 Audio is among one of the most important parts of making a video (besides the content of course!), but getting an external microphone can be expensive (around $400-$600). Why spend $500 on a wireless mic when you’re just starting out?

You don’t have to! Oh YEA! In fact you can get a professional sounding lapel mic for under $20.

Now you might be wondering why you need to use a lapel mic in the first place, and the answer is pretty simple: consistency and quality. One of the best things about having a lapel mic is that you can film just about anywhere and have high-quality audio. You can film inside a vehicle (even as you jump through it like I do in the video below), while your camera is outside the vehicle and still pick up perfect audio. What if you wanted to film from the other side of a lawn? With your lapel mic your audio will sound perfect, as if you were right there in front of the camera! How cool is that?!

Now that you’re all amped up and ready to go, here’s how you get a wireless lapel mic for under $20. (Just incase you would rather watch how to do it you can check out this video, which happens to be one of my favorites.)

First off, to get this wireless lav mic you’ll need an iPhone or Android…or a Windows phone…or a Blackberry….or any smartphone….or a digital voice recorder device that will fit in your pocket. Second thing you need is a hands-free wired unit, you know, like those headsets that come with your phone – it’s got two earbuds and a microphone. Third thing you need is to download an audio recording app to your device; for Android I recommend RecForge, if you have an iPhone I recommend Voice Record Pro – but really, any audio recording app should work just fine (take note Windows phone peeps).

Now that you have all the pieces, you’re going to need one last tool: a pair of scissors. Taking your hands-free headset, find the earbud that does NOT have the microphone on it, you’ll want to cut this off at the joint where the two lines meet.

What you’re left with is a high-quality professional lapel mic for under $20. 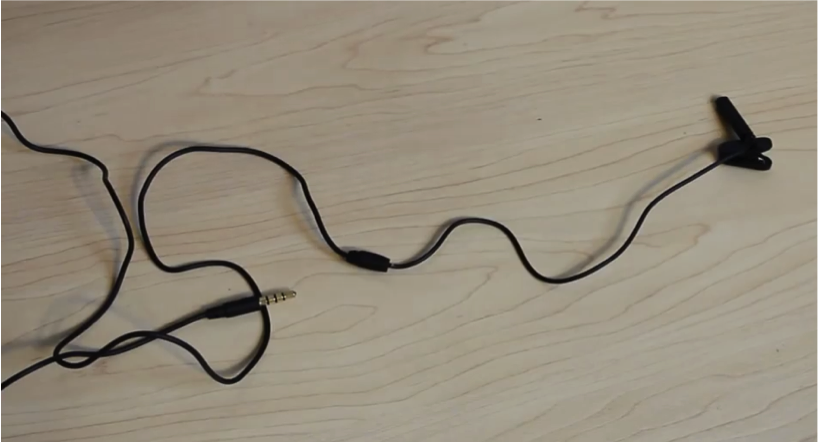 Now that you have your lapel mic for under $20 it’s time to hook it up and record!

You’ll want to clip the lapel mic to the collar of your shirt and make sure that the microphone hole on the side is facing away from your neck, otherwise you can end up with distortion, rustling noises, and overall audio that just doesn’t sound as good as it should.

Once you have your mic in place, run the wire down your shirt and then plug it into your recording device (iPhone or Android). Fire up the audio recording program, and start recording. You’re ready to go!

When you’re recording, it’s important to make sure that you still record audio with your camera, this is so you have a way to sync up, or match, your audio to your video later on when you’re editing.

After you’ve recorded your video and audio, it’s time to import both files into your post processing suite.

If you’re using Adobe Premiere Pro, there is actually a super nifty tool that syncs up your audio automatically for you. All you need to do is select the video clip and the audio clip, right click on either one and select “Merge Clips”. From here, you’ll get a menu that pops up asking how you want to merge these two clips. Under “Synchronize Point” Select “Audio” and choose Track Channel 1 (this should be the default of where your camera recorded its audio) After that click “Ok” and your video will be merged with your audio file into a new clip. Now you have your sweet professional audio on your video file!

If you’re using another post processing software, you’ll probably have to do it the “Old Fashioned” Way; basically what this means is that after you import your video and audio file, you’ll need to zoom in on the wave forms and match up the audio from your video file to the audio from your lapel mic. It’s still a pretty easy process, but just takes a tad bit longer. Here’s a quick pro tip to help you out, when you’re filming your videos, clap your hands 3 times before starting your scene- this will help you immensely when it comes time to sync up the audio.

And that’s it! Now you know how to get a wireless lapel mic for under $20!

Enjoy this tutorial? Let me know and leave me a comment!